Bill Wagner devoted over forty years to historic preservation; taking significant old buildings and preserving them for future generations. He was the leading architect in the restoration and rehabilitation of Terrace Hill as well as many other notable projects. A Dallas Center resident, Bill played a significant role in one of the earlier phases of the renovation of the Dallas County Courthouse.

He collected anything and everything he thought would have some historical future – photos, stamps, first-day covers, you name it – and created reproductions of what he saw in eye-stopping black and white drawings.

The Wagner family has donated an overwhelming portion of Bill’s drawings, pen and ink sketches, historic preservation memorabilia, and much, much more to the Dallas County Conservation Board. The William J. Wagner Corporation, consisting of board members Elaine Estes, Jack Porter, Liz Craw, Shirley and Dick Kiefer, John Kimple and Vicki Nash, was formed so that Bill’s lifetime of collecting and preserving would continue to be preserved, displayed and interpreted for future generations.

A capital campaign was launched shortly thereafter to build an Exhibition Hall addition that would join the Dallas County Conservation administration building with Baldwin Hall at the Forest Park Museum complex in Perry. This addition completed and open to the public in 2011, archives the works and accomplishments of Bill.

The Wagner Gallery houses Bill’s well known collection of pen and ink drawings of landmarks all over Iowa and throughout the United States and sketches of prominent architecture around the world. Bill collected anything he thought would have some historical future – photos, stamps, first-day covers…and created reproductions of what he saw in eye-stopping black and white drawings.

Bill’s extensive collection of books (approximately 900) on Iowa and county history, historical preservation, Iowa authors and artists and a comprehensive collection by, or about, Herbert Hoover will also be housed in the gallery.

If all of this isn’t exciting enough, we consider ourselves privileged that a Dallas Center building, formerly used to weigh grain wagons, and one of Bill’s rescued structures that he restored and used as his home office, has been moved to the Forest Park Museum complex and is open to the public.

The Scale House, an 1880’s Dallas Center building formerly used to weigh grain wagons and one of the late William J. Wagner’s rescued and restored buildings, has reached its final resting place at t 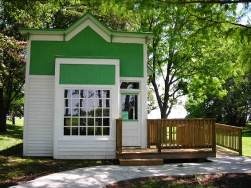 he Forest Park Museum Complex in Perry. “Bill”, an architect and preservationist for over 40 years, converted the scale house into his office utilizing historic building furnishings and used it for his work and studio for many years. Many of his sketches still adorn the walls. Funded by the Wagner family and a grant from Questers of Iowa, it was moved to Forest Park as part of an effort to preserve his legacy. Visitors are able to view and marvel at his works. This historic move by Bissell House Moving Company was captured by television crews as the old scale house made its journey down rural dirt roads only to rest on the grounds for several weeks due to soggy grounds. When the water soaked ground dried out, the scale house was moved onto its foundation and we can now say that it truly is at home.