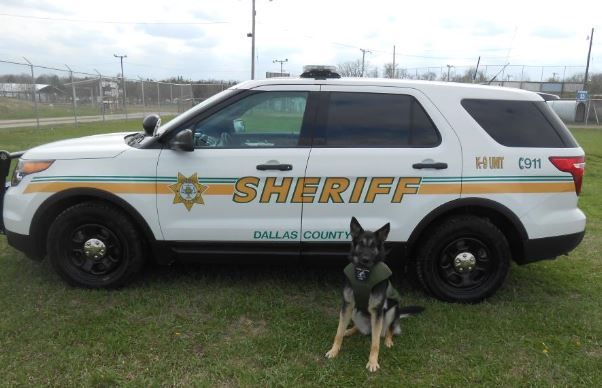 Kaia (pronounced Kya) was born in 2012 and is a pure bred female German Shepherd.  She was purchased from Midwest K-9 LLC in Pleasant Hill, IA in May of 2014 where she completed extensive training in drug detection.  She joined the Dallas County Sheriff’s Office in 2014 and is skilled in the detection of methamphetamine, ecstasy, marijuana, cocaine, and heroin drug odors and their derivatives.

Kaia’s handler and partner is Deputy Brent Behnken.  Deputy Behnken has been with the Dallas County Sheriff’s Office since 2012 and a peace officer since 2008.

Since their partnership, Deputy Behnken and Kaia have assisted in the seizure of drugs and drug currency with a street value at over five million dollars.  Their largest seizure to date was an agency assist of over 700 pounds of marijuana seized from a semi-tractor/trailer in March of 2015 on Interstate 80.


A human-canine officer team is a tried and true law enforcement tool. With their keen eyesight, speed and sense of smell, police dogs can perform certain tasks faster and at lower cost than human officers with less risk to officers and the public. Their role is to help prevent the flow of illegal narcotics through Dallas County and its surrounding communities.

The Dallas County Sheriff K-9 Units, both past and present, have been responsible for numerous illegal drug seizures and will continue to loyally serve the citizens of Dallas County.