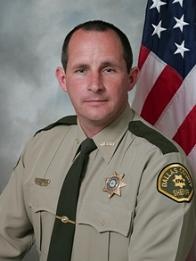 The staff of the Dallas County Sheriff’s Office is committed to:

Since Sheriff Leonard’s election in 2007 and re-election in November of 2008 he has developed the Chaplain Program, the Reserve Deputy program and assisted with the development of the Youth Character Building Academy based out of the Waukee Police Department. In 2007 he was the first Dallas County Sheriff to attend the National Sheriff's Institute in Longmont, Colorado. In 2008 he was the first Dallas County Sheriff selected to attend the National FBI Academy in Quantico, Virginia. In 2010, he completed the Certified Public Manager course at Drake University.

Sheriff Leonard lives in Dallas Center with his wife Michelle. They have 5 children, and 4 grand- children. Chad is the son of Mike and Barb Leonard of Emmetsburg, Iowa; he was born and raised in Spencer, Iowa with 3 brothers and 1 sister. He attended Sacred Heart Catholic School and graduated from Spencer High School in 1990.

As the enforcement arm of county government, the Dallas County Sheriff’s Office serves the people of Dallas County by maintaining law and order, preserving the peace, and interceding to bring law-breakers to justice.

To effectively serve our community, the leadership of the Sheriff’s Office is first committed to serve our staff and their families through the promotion of positive character qualities.

Investing time and energy into the development of these character qualities will enable our employees to correctly respond to life situations and establish successful relationships in both their professional and personal lives.

To successfully accomplish our mission, we, the Sheriff, Deputy Sheriffs, and staff of the Dallas County Sheriff’s Office, agree to: